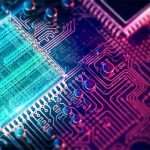 A computer is made up of many parts, one of which is today’s Tech Term: the motherboard. We’ll discuss what the motherboard does for your computer and why it’s such an important part for its continued operation.

Parts of the Motherboard
There are several parts of a motherboard that are all needed in order for it to function as intended. Depending on the model, however, it will look a bit different and have a different form factor, or specifications. Still, all motherboards will generally have these basic components:

Do you understand how the motherboard works better? Do you have any other suggestions for tech terms in the future? Let us know in the comments.